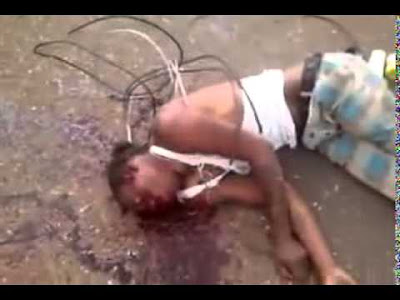 "And Cain talked with Abel his brother: and it came to pass, when they were in the field, that Cain rose up against Abel his brother, and slew him.And the Lord said unto Cain, Where is Abel thy brother? And he said, I know not: Am I my brother's keeper?And he said, What hast thou done? the voice of thy brother's blood crieth unto me from the ground. And now art thou cursed from the earth, which hath opened her mouth to receive thy brother's blood from thy hand;When thou tillest the ground, it shall not henceforth yield unto thee her strength; a fugitive and a vagabond shalt thou be in the earth."

When blood is shed it is a wicked thing. even if in revenge, retaliation, riot, abortion, murder, manslaughter, violent robbery etc. It is wicked and it has terrible consequences. Cain killed Abel out of jealousy and envy and when the reward came he knew he was doomed.
Bloodshed is a wicked thing before God and whoever is involved will face His wrath.

The Lord here said that when a person is found murdered in a place, atonement should be made so that the people around that place will not bear it's consequences.

Abortion is bloodshed and it has rewards.

Violent rape is bloodshed and it will hunt the person to the grave. Whoever raped a woman should go and apologize no matter what it takes or evil will follow the person wherever he goes.

Any kind of riot, revolt, or protest that somebody gets killed or is injured such that blood touches the ground will have grave consequences.

Starving or denying somebody of something they need, whether it is food or sex or of an opportunity is bloodshed because it might lead them to sin and sin kills.

Witchcraft and occultism cause bloodshed.

When blood is shed, there will be retaliation from the spiritual then to the physical.

Some people have not done abortion or killed anyone but their parents or parent's parent have and it is affecting them.

Some people there are witches in their foundation and blood has been spent and they are suffering now.

1. Every blood that is speaking/crying against me, be silenced with the blood of Jesus

2. Every blood that is crying from my Father's house against me, be silenced with the blood of Jesus

3.  Every blood that is crying from my mother's house against me, be silenced with the blood of Jesus

4. Every blood that is crying from my place of birth against me, be silenced with the blood of Jesus.